What service provider qualities or characteristics ultimately result in buyer satisfaction over the length of a relationship? We can answer this question from the data we collect and analyze through Outsourcing Center’s annual Outsourcing Excellence Awards program. Each year we monitor specific words that buyers use to describe their service providers.

In this descriptive words study of the 2009 awards data, we analyzed 46 outsourcing relationships out of the total group of nominations. All 46 are relationships that had been in existence for more than one year at the time we studied them. The outsourced processes were segmented into 54 percent BPO relationships and 46 percent ITO.

In telephone interviews, we asked buyers to list up to top five words that describe what they like about their service providers. Data from the 2009 awards program reveals five findings regarding such word use including some significant changes from prior years.

Finding 1: The provider qualities cited by buyers differ according to whether it is an ITO or BPO relationship.

The study found that characteristics tied to buyers and providers working together (e.g., those listed in the prior paragraph such as “collaborative”) brought a high level of satisfaction to BPO buyers, whereas ITO buyers were more focused on characteristics such as “reliability” and demonstrating a partnering approach by investing in technology. Figure 1 illustrates this finding. For example, the top three rows of Figure 1 point out that 100 percent of the references to “committed to excellence” and “identifies value-adds” were statements of BPO buyers, not ITO buyers. Similarly, 80 percent of the BPO buyers cited the word “supportive” to describe what they like about their service providers, while only 20 percent of the ITO buyers cited this word.

We tracked all of the provider-descriptive words cited by the nine award-winning buyers and found a total of 27 words describing what they liked about their service providers. Figure 2 illustrates the percentage of references to each of the 27 words. For example, “professional” was the characteristic these buyers most often cited. Also high on the award-winners’ list were “partnering” and “experienced, competent.” Interestingly, “caring, passionate” and “strong in governance” were not cited by any of the 46 buyers except three of the award-winners. 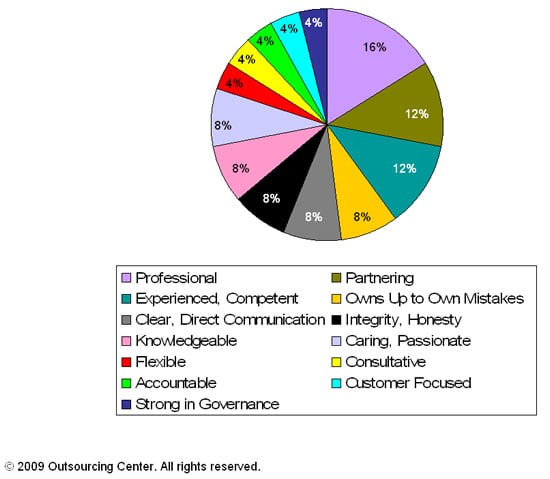 Our descriptive words study in past years found that the number-one characteristic cited by buyers from 2003-2008 was “partnering.” During those years, buyers described a partnering mindset as a characteristic that developed over time. The 2009 data reveals a significant change. A “partnering approach” to the relationship was a “given” and table stakes for provider selection in these deals. Although partnering was a significant factor in the award-winning relationships (see Figure 2), it ranked number three on the list of characteristics cited by all 46 buyers. In addition, it tied with “responsiveness.”

We also tracked the top eight words most frequently cited by the 46 buyers and found them to be:

The study found that “flexibility” is the quality that buyers cited most often as what they like about their service providers. Flexibility accounted for 20 percent of the total responses comprising the top eight characteristics mentioned by the 46 buyers. Close behind it was “integrity, honesty” with 19 percent. “Partnering” and “responsiveness” each garnered 10 percent of the words cited.

Our analysis accounts for the high number of responses for “flexibility” as due to the length of the relationships, causing them to encounter situations where business needs changed dramatically or frequently, necessitating flexibility in resolving issues and realigning buyers’ and providers’ interests. This is a natural consequence of a maturing outsourcing industry with buyers and suppliers achieving successful outcomes and extending their relationships for longer terms.

We noted an interesting phenomenon in the interviews of the buyers. In answering the question (to list up to five words describing what they liked about their service providers), most people responded quickly with the first three words, clearly conveying these were characteristics stand out as successful components of their outsourcing relationships. Most respondents took longer to think about their response as to the fourth and fifth words they mentioned.

Figure 3: Top eight provider characteristics cited, shown according to order in which the words were stated 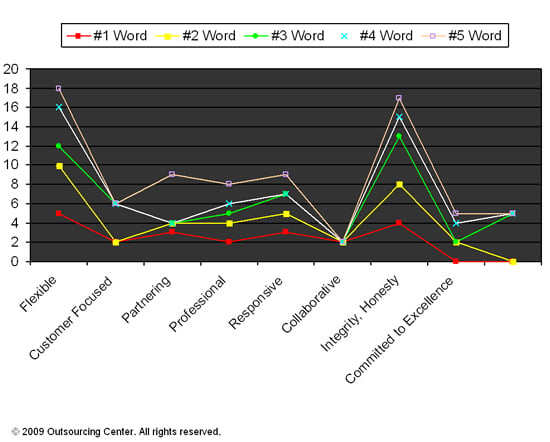 Our study of the 2009 data reveals a major change in the types of characteristics buyers most often cited as what they liked about their service providers over time. In prior years, process expertise and advanced technology were high on the list. This year, the focal point for more than half (63 percent) of the descriptive words buyers mentioned is interpersonal or “soft” skills. Knowledge/capability skills represent 37 percent of the responses. (See Figure 4) 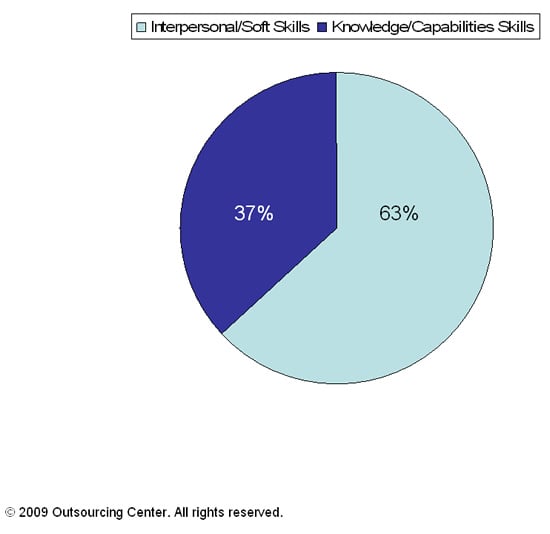 Interpersonal or “soft” skills specifically cited in the study include the following (ranked top to bottom according to most often cited):

In contrast, the 46 buyers cited the following knowledge-skills descriptions of their providers:

A surprising finding in our study of the 2009 data is the entry of five characteristics not mentioned in prior years. Percents are of the total references to new characteristics. These include:

Only ITO buyers cited “professional,” “responsive,” or “reliable.” Only BPO buyers mentioned “owns up to own mistakes.”

A look back at Figure 3 shows the characteristics buyers most often cited in tandem with “professional” and “responsive.”

In addition, buyers that mentioned “responsiveness” also mentioned some of the interpersonal and “soft” skills such as “caring,” “conscientious,” and “concerned.”

Finally, the study revealed a change from prior years in appreciation of the characteristic “proactive”. Especially in 2004 and 2008, a preponderance of buyers affirmed that they liked their providers’ proactive approach to services. In contrast, the 2009 data found that, among the 46 relationships studied, only one buyer mentioned “proactive” as a top quality of its service provider.

It is important to point out that the characteristics that buyers listed in the 2009 study reflect their experiences and level of satisfaction over time rather than their impressions of what they liked about their service providers when they selected them. The study revealed that, among the characteristics discussed in this article, only two showed up in the ranking of the 46 buyers’ top two criteria in their provider selection process: three buyers cited “flexibility” and one cited “customer focused.”

The study clearly reveals that there are important provider qualities for success and value-creation that buyers may not be including among their provider selection criteria.