“We are seeing a sea change in offshoring in the financial services industry,” says Peter Lowes, Partner, Deloitte Consulting LP. “Financial institutions are reshaping themselves before our eyes. They will be forever changed by the phenomenon of globalization,” continues the Leader of Deloitte’s Outsourcing Advisory Service practice.

This is one of the major conclusions from Deloitte Touche Tohmatsu’s Global Financial Services Industry group’s July study, entitled “Global Financial Services Offshoring Report 2007.” It found six percent of the employees in the world’s financial institutions are now working in offshore centers, mostly in India. “Six percent is a significant number. It is 20 times greater than the number we started with four years ago” and double last year’s figure, Lowes reports. Specifically, the report found the average number of staff employed at each financial institution grew from 150 in 2003 to 2,700 last year.

The large number of workers is “a sign of offshoring’s growing adoption,” Lowes says. In 2001 less than 10 percent of the financial services industry had moved work offshore. Today, the Deloitte report puts the figure at 75 percent.

Offshoring’s growth is important because it’s a leading indicator for other industries; the financial services industry has the highest salary expense base. “Financial services will benefit more because of lower HR costs,” explains Lowes.

Given the compelling cost savings, offshoring is now “not a question of if but when,” says Lowes. “You have to have a pretty good reason not to offshore if you want to survive and flourish.”

The study found that more than half the institutions reporting enjoyed savings of at least 40 percent for each business process offshored, although some processes had savings as high as 70 percent. “That’s pretty significant,” says Lowes. “What else can you do to take that much cost out at such a low operational risk?” At some financial institutions, this savings equals three percent of their total cost base, according to the report. 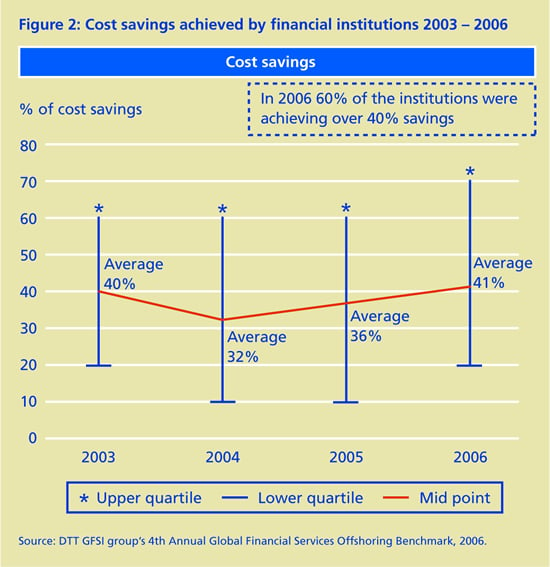 These verifiable cost savings give offshoring “its sustainable advantage.”

However, the report also found spreads “are gradually starting to tighten.” Lowes says some of that tightening will be mitigated as new capacity from places like China comes on-stream.

The Deloitte report says offshore growth is in a J-curve: the gradual adoption period has segued into a period of steep growth. In other words, “We are at the end of the beginning,” Lowes observes. Industry leaders have already achieved a 20 percent adoption rate; the report predicts the rest will follow.

The study also found that “anything that isn’t nailed to the floor in an expensive location is a candidate for outsourcing,” according to the Deloitte executive. He says when Deloitte works with a client, the starting question is: “What can’t we move offshore? Everything is up for grabs,” he notes.

Typically, some activities have to remain at home. They include proximity to key clients or specialized skill sets. Client services, marketing and sales, management planning, regulation, and policy-making also tend to stay at headquarters.

Historically (like four years ago), IT was the first process financial institutions sent offshore. Then call centers for credit cards migrated. Back-office operations were next, which included human resources, finance and accounting, and insurance and mortgage processing.

Lowes says “the final frontier” is knowledge-based processes like portfolio analysis and investment hypothesis and decision-making.

Investment banks are beginning to move sophisticated front offices to India. But this generally is not a cost-saving move. These firms want to hire 100 PhDs for portfolio analysis-“the heavy number-crunching for sales and trading.” Lowes says the investment banks are turning to India because they are “having a tough time” finding people with this skill set on Wall Street.

The Growing Importance of China

Lowes says the biggest surprise for him was the swift rise of China. “It was faster than I anticipated,” he reports. The study found offshoring in China has expanded beyond IT to BPO; currently a third of financial institutions now have back-office processes based in China. In particular, suppliers in Dalian are doing a lot of work for Japanese banks and insurance companies.

Lowes says this is a good thing for the outsourcing world “because it creates options in the marketplace” because suppliers want to diversify outside of India “to secure their long-term viability.” (The report found last year India employed two-thirds of the world’s offshore staff.) While China is one of many other-than-Indian offshore hotspots, it is noteworthy because of its huge scale. “China has a sustainable cost structure,” he says.

China’s huge labor pool is important because labor arbitrage moves to new locations over time. He points out that Ireland was a leading offshore location for financial institutions in 2004. Today, however, it has tapped out its supply of financial professionals. Lowes says labor costs in Ireland today “are almost the same as the UK.”

The report says that only about 15 percent of Indian college graduates are suitable for employment in this sector of the offshoring industry. “This may result in a shortfall of up to half a million professionals by 2010,” notes the report. 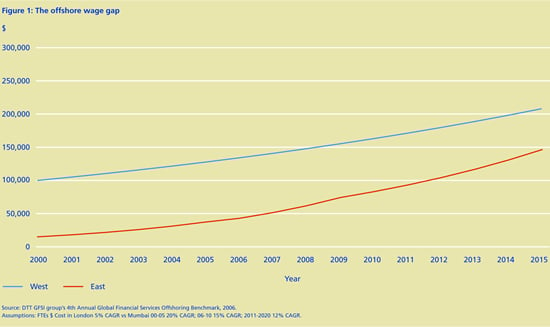 He labels Poland an up-and-coming player because of its strong background in engineering.

Another brewing trend is to sell off captives to free up capital, like GE did with Genpact. He observes “a lot of private equity money is sitting on the sidelines” to fund these spin-offs.

The Deloitte executive notes there are some smaller players that have misgivings. But they will have to find a way to create a competitive cost structure if they don’t want to be consumed by a competitor. As the report says, “The gap between the best and the rest widens.”

Four years ago Deloitte, responding to the needs of its clients, conducted its first offshoring study. Each year its researchers ask the same set of core questions. Then they add some new questions to reflect the ever-changing world of offshore outsourcing.

How the study was done: The survey included responses from 36 financial institutions based in eight countries and included six of the top 10 banks in the world by market capitalization.

The Shift to a Patient-Centric Healthcare Ecosystem

article,China,Deloitte,Genpact,India,Ireland,offshore,Poland,research study
We use cookies to ensure that we give you the best experience on our website. If you continue to use this site we will assume that you are happy with it.OKPrivacy Policy