You are at:Home»Articles»Educators Do the Math, and It Adds Up to Outsourcing | Article 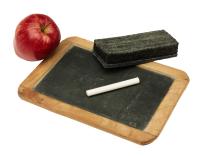 “We decided to move as many resources to education as possible. We really wanted to make a change from a 38-year-old system,” states Pam Brown, Director of Facilities & Asset Management for the Portland Public School District (PPSD). The district’s facilities management processes — with its schools’ custodial services being contracted out to a local union — had been in place for 38 years when the decision to outsource was made in 2002.

“Just imagine doing something one way for 38 years!” Brown says. “Left unchanged, people tend to get locked into doing something a certain way; and they think that’s the only way that things can be done. But we are living in a complex world that is changing. To move ahead, we really needed to look at the whole process; and that’s what we did.”

All of Oregon’s public school districts were in an unstable fiscal situation at the time because of several years of budget shortfalls in state revenues, and PPSD is Oregon’s largest district. Brown says they determined that PPSD could achieve cost reductions by changing business processes; in doing so, they could alleviate the impact of the shortfalls. PPSD’s Request for Proposal for custodial services stated the school district wanted to make a big change and was seeking a provider to help in that effort.

Seeing the Ability, not the Disability

PPSD’s board awarded the outsourcing contract to Portland Habilitation Center, Inc. (PHC), the largest unionized not-for-profit organization in the United States. PHC performs outsourced custodial, landscaping, clerical, and light manufacturing work in several northwestern states. It is distinguished not only by a wide reputation for excellent work but also by the fact that 75 percent of its employees have disabilities. Some have vision and hearing impairments, others have medical conditions requiring accommodation, and some are developmentally disabled.

Although the state of Oregon gives preference to qualified rehabilitation firms for some work, this was not the only reason for choosing two finalist providers whose workforces were comprised primarily of employees with disabilities. “You want to model the behavior that you want in the world,” says Brown. “We wanted students to see people working in the world in all different situations. And we wanted our community to see this, too.”

In addition, PPSD could not ignore PHC’s proposal touting an estimated $10 million in operational cost reductions over the first two years of the contract while increasing the scope, frequency, and quality of cleaning. The work was transitioned to PHC on August 23 — leaving very little time to train 300 custodians and do the normal heavy summer cleaning work before schools opened the first week of September. Brown credits the collaboration between PHC and the district’s transition team (including the procurement officer, all the school principals, and others) for successfully achieving the required outcomes

“PHC had ideas about better ways to do the cleaning,” she recalls. “In the old contracting situation, one custodian would do the heavy cleaning and the strip/wax floor work in an assigned school all summer. With the outsourcing situation, the work is done in teams; and 15 people can clean a building from top to bottom in a week.” Besides the teamwork, PHC changed the timing of the heavy cleaning. Its crews do the strip/wax floor work at night during the school year, rather than waiting until summer to do it.

According to Brown, the previous contracting situation had shifted to cleaning PPSD’s schools only every other day in order to reduce costs for the district. With the savings generated by the outsourcing provider’s expertise, it became affordable to clean Portland’s schools every day.

Again contrasting the old ways to the new ways, the district had only two supervisors for 318 custodians under the contracting situation. PHC not only has more supervisors but also has quality assurance people who are responsible for the level of cleanliness in the schools. PHC also won a separate contract to clean the mop heads and rags; in addition, its crews are responsible for separating organic items in the district’s recycling program.

Even with the $11 million savings achieved over the first two years and the quality of cleaning improved, both PHC and PPSD admit their first year of transitioning to outsourcing was tough and required significant change management techniques.

PHC’s custodians faced a completely different type of working environment when they began cleaning PPSD’s schools. For the most part, their background was in cleaning almost-deserted federal buildings on swing or graveyard shifts. On day-shift work in PPSD’s schools, there were children and adults everywhere. PHC’s crews had to learn to relate to children and how to recognize whether the people in a school building were supposed to be there. A significant challenge was learning how to respond to multiple urgent matters at the behest of various teachers, students, and administrative staff, rather than just one PHC supervisor. There was a constant barrage of walkie-talkie emergency calls. “And remember — kids get sick, and there are special disinfecting processes in a school environment,” reminds Brown.

As she explains, the PHC custodians faced other learning curves. “PTAs, music groups, and other community groups use our buildings after school. Every day there may be a different group of people using a building. PHC crews have to set up and dismantle equipment for those activities.” At the schools lacking cafeterias, the PHC crews also do lunchroom duty, setting up and dismantling tables in multi-purpose rooms. Custodians also must monitor boilers, perform emergency lock-downs in some schools, and are responsible for opening and securing entire buildings.

Flexibility was suddenly the skill set most in demand. PHC’s Public Affairs Director, Anne O’Malley, recalls the crews were “at first intimidated and confused by multiple draws on their time, the inability to maintain a routine, and the staggering new array of duties, responsibilities, and cultural knowledge added to the standard custodial skill set previously required.”

It took most of the first school year for the cleaning teams to adjust to the new environment. The school district, in cooperation with PHC, designated two of its schools as training areas. Training includes special security classes and cultural sensitivity sessions. PHC still sends new hires through this important training before they join the workforce assigned to PPSD schools.

Their collaborative efforts paid off. “After the first year, it was huge, like the Titanic!” Brown states. “Today, many of the district’s principals and teachers say the schools have never been cleaner and the floors never shinier.” The PHC custodians now regularly win awards and commendations from the student body, the staff, and the teachers. The two Portland organizations are a team.

PHC crews even go to the schools on “Community Care Day” each August, when people voluntarily help the district with lawn mowing, tree trimming, and painting. PHC’s participation is not contractually required. Nevertheless, Brown says PHC always participates, giving the district “hundreds of volunteer hours” not only from the custodians who work in the schools but also from other employees throughout PHC.

Their outsourcing relationship is an excellent example of implementing effective business solutions within public agencies. According to Brown, “It’s a miracle, really. The board’s decision to outsource was a concrete decision to put our money into our core functions — the education of children. This relationship has been one of the bigger accomplishments ever for our district and for PHC.”