High-level customer service is essential for online and catalogue retailers because their sector is highly competitive. Ramping up and down call center staff due to seasonal fluctuations combined with meeting the needs of customers after hours and on weekends make it challenging to provide the kind of top-notch customer service this segment expects.

Shop Direct, one of the largest online home shopping firms in the UK, had those personnel challenges. “We always struggled to recruit people to work after seven or eight o’clock in the evening,” says Nicola Collister, group customer experience director for Shop Direct. Last year five million customers ordered online or from catalogues, bringing in annual sales of £1.5 billion.

The challenges of being the first

Shop Direct performed due diligence and realized there was no provider with a similar business model in the UK. Collister says she was interested in working with more seasoned agents. “We now have more people with more experience in life skills because Arise gives us the opportunity to reach a population not typically attracted to the traditional brick-and-mortar call center,” she explains.

With the holiday shopping season looming, it developed a pilot program with Arise starting with 75 UK home-based agents. Assuming the pilot would be successful, the partners developed a plan to transfer 800,000 inbound sales calls to Arise in the busy months of October, November, and December.

The pilot presented a unique challenge.” Recruiting was more difficult as it was the first time a UK retailer used home-based agents,” says Collister. She adds home-based agents who were interested “at first were a little skeptical and thought Arise might be a fly-by-night company.”

Arise took its first call on October 6. By the end of December the supplier had 200 people working on the account. The successful pilot led to a five-year contract.

A model whose time has come

Riordan sees similar demographic metrics. “Arise has an attrition rate of 8-10 percent,” he says. (This rate calculates the number of productive hours leaving the network rather than the departure of individual agents. It also accounts for the impact of seasonal ramps and seasonal agents.) “The average age of a contact center agent in the UK is 25,” he continues, “while Arise’s average age is 42. In addition, home-based agents “tend to be more homeowners than renters with a deeper educational background,” he explains.

“The advantage is generally these agents are more stable and committed to their work than young workers who are still living with their parents or in a transient housing situation,” explains Riordan. “For the most part, we have found that the older, educated, home-owning worker has the life experiences to relate to customers and takes satisfaction in providing superior customer service.”

A March 2009 report by Frost and Sullivan entitled “2009 Outlook for the Contact Center Industry – What are Customers Buying in the Current Economy?” noted a significant paradigm shift in attitudes towards home-based agents, as shown in the figure below. 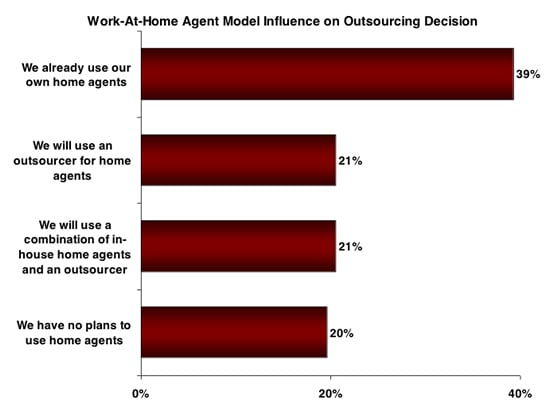 “The real accelerator is their ability to up-sell and cross-sell more effectively and therefore drive more revenues for the organization. At the same time they are able to stem customer churn. The result is better KPIs and higher levels of first-call resolution,” adds DeSalles.

The allure of being a home-based agent is appealing to customer care professionals, according to Riordan. Arise does little or no advertising outside of Web marketing. He anticipates growing the UK employee base the same way he did in the United States. “Once the momentum started, it grew almost exclusively on referrals,” he reports.

Shop Direct realized a significant improvement in productivity and cost-effectiveness with the Arise agents. Internal analysis revealed that productive agent utilization was around 50 percent, factoring in breaks, holidays, and absence. Under the agreed pricing model, Shop Direct only pays when Arise agents actually work, resulting in 100 percent utilization.

The agility in meeting fluctuating call demands appeals to Collister. “The ability to ramp up quickly is a benefit. We were able to increase the agents by 75 last week above what we would do normally.”

“We can ramp up by a factor of five times depending on their needs,” explains Riordan. “We schedule in half-hour increments, so it is not unusual to go from 20 to 100 in a half hour.”

Outsourcing has enabled Shop Direct to continue to provide excellent customer service while continuing to increase its market share in online and catalogue retailing. The flexibility provided by the engagement enables prompt, consistent customer service during peak selling seasons.

Bringing an outsourcing partner on board has resulted in enhancing the skill level of in-house agents, Collister reports. “Outsourcing has freed up our training department. They used to be busy all the time with new recruits. Now they can do development training with our existing people.”

“Outsourcing allows organizations to condense their internal resources into the times that their people want to work, which leads to a happier workforce,” adds Riordan.