At Outsourcing Center we recently studied 92 of the relationships from the 2008 and 2009 annual Outsourcing Excellence Awards program. We wanted to identify the drivers in buyers’ decisions to add scope and/or extend the length of their contract term. We also wanted to determine whether the amount of this relationship contract activity has changed since our prior study in 2004.

In the earlier study, we evaluated 199 outsourcing relationships during 2003 and 2004. Forty-seven percent of the buyers and providers in that study stated they recognized, in hindsight, that expanding the scope of services and/or lengthening their contract term would have enhanced their relationship to be more mutually beneficial. In actuality, only 22 percent stated they did expand the scope of services.

Buyers these days are savvier about outsourcing and know that tactics such as adding scope to make the deal more mutually beneficial over time are a key factor for successful outsourcing. In our recent study of 92 relationships in 2008-2009, we found that more than three-fourths (79 percent) of the buyers added scope to their original contracts, and 44 percent of them added scope at least two separate times.

As Figure 1 illustrates, almost half of the buyers that added scope did so because over time they identified new business needs. 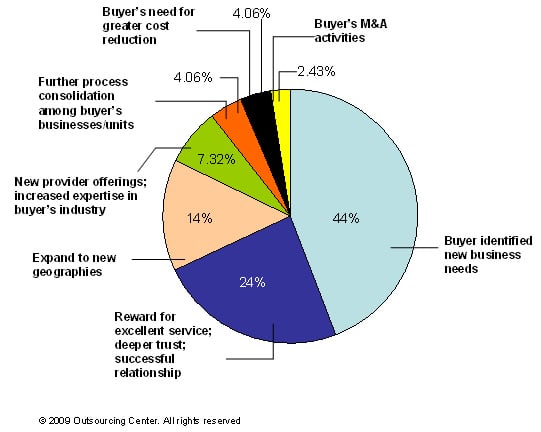 Among the relationships where buyers expanded scope because of new business needs, we found the following types of situations:

As Figure 1 displays, 24 percent of the buyers expanded scope because of increased confidence and trust in their provider’s capabilities to deliver on its promises. These decisions often had a component of adding scope to reward the provider for excellent service. Many of this group of buyers also extended the term of the contract at the time of adding scope in order to reward the provider for high-quality services. Many of these buyers also renewed their contracts early, before the contract end. (See “Study Reveals Key Factors in Decisions for Early Renewal of Outsourcing Contracts” in the February 2009 issue of Outsourcing Journal.)

Figure 1 also points out that 7.32 percent of the buyers added scope as their providers’ capabilities moved up the value chain with new offerings and especially as a provider increased its domain expertise in a buyer’s industry. Examples of expanded scope in this situation include:

In addition, the contracts for nine of the 92 relationships were up for renewal or exit within 12-24 months of the time of our study. Of these nine:

The study found some significant factors in the decisions to renew and add scope, regardless of the drivers cited in Figure 1. Buyers described their perspectives on whether to expand their relationship with a provider by describing their traits and performance in comments such as the following:

Scope-expansion decisions usually arise from seeds the provider plants about where and how it can provide more valuable services to the buyer. However, our study of hundreds of outsourcing relationships since 1996 in the awards program reveals that many buyers miss the boat because they don’t provide opportunities for such discussions. They outsource in the first place to take advantage of a provider’s leverage points (economies of scale, capital, technology, expertise, and labor arbitrage) but don’t implement effective governance structures that ensure opportunities for discussions about potential added value to take place frequently as the relationship evolves.

Obviously, in some cases, the buyer does not want the provider involved in its internal strategic planning sessions. However, creating win-win relationships by adding scope (and possibly also extending the term) necessitates the buyer sharing information so the provider has an understanding of the buyer’s future needs. Buyers stated in our study that some of these discussions take place on an informal basis; others on a more structured meeting level quarterly, semi-annually, or annually.

The governance agreement in an outsourcing relationship needs an effective communication structure that facilitates the buyer gaining knowledge of the provider’s broader capabilities and the provider gaining an understanding of how it can leverage its capabilities across the buyer’s other business processes and business units to meet evolving needs.

How the study was conducted: We used written information and telephone interviews of the 92 relationships in our analysis. The majority of the buyers in the relationships we studied are in the following industries: manufacturing/high-tech manufacturing, healthcare/pharmaceutical, oil and gas/energy/utilities, information and communication technology, financial institutions, and government entities. The study included one buyer in each of the following industries: media/entertainment, distribution, logistics, consumer packaged goods, airline/travel.