Buyers renewing an outsourcing contract earlier than the point in time when the contract is due for renewal or exit is a highly effective strategy in building a mutually beneficial long-term relationship. At Outsourcing Center, we have studied successful relationships since 1996 through the annual Outsourcing Excellence Awards program. Over time, we’ve noted that a preponderance of both buyers and service providers state that expanding the scope of services and/or realigning interests by creating new mutually beneficial opportunities definitely enhanced their relationships and created more value.

We recently studied 92 of the relationships from the 2008 and 2009 awards program in an effort to identify the key factors that influence or trigger buyers’ decisions to renew their contracts before the renewal/exit date.

As Figure 1 illustrates, buyers in almost 50 percent of the IT deals and the HR deals renewed early. 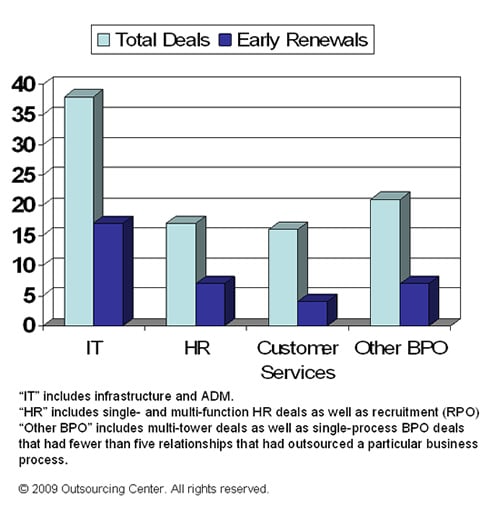 Initially, we assumed the reason for the greater volume of early renewals in IT and HR deals was that new technology developments in recent years were more prevalent in HR and IT deals and that these buyers renewed their contracts early because of the HR and IT providers’ ability to offer more technology-enabled services to their customers. However, the study revealed this assumption was incorrect; the impact of technology on new capabilities and offerings actually applies across the board almost equally among the early renewals we studied.

Looking beyond our assumption, we found that the majority of the IT and HR deals in this study are highly successful relationships, and that this is the reason for the higher number of early renewals in these two categories. The majority of the HR and IT buyers in this study stated that they renewed their deals early as an effort to realign both parties’ interests over time and to strengthen the relationship. (As Figure 2 illustrates, this is also the number-three reason influencing buyers to renew early.) 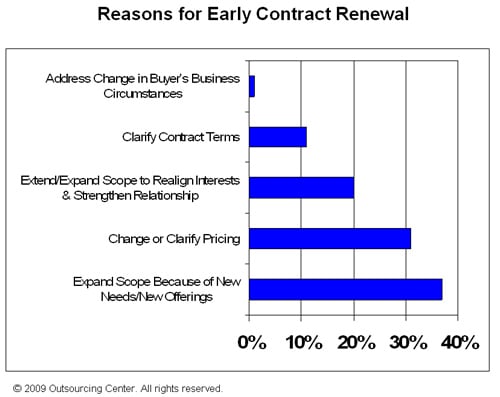 In addition, the original contracts for nine of the 92 relationships we studied were up for renewal within 12-24 months of the time of the study. One of the nine planned to renew early in order to make necessary pricing adjustments to benefit both companies.

Among the 38 percent that renewed their contracts early, five buyers renewed early twice. In each case, the early renewals were one or two years apart and each early renewal added scope as an acknowledgment of deepened trust in the provider’s capabilities and the relationship itself.

As we anticipated, the study found that trust in the provider is a “given” in early renewals as well as deals renewed at the end of the contract term.

Looking beyond the trust factor, the study revealed the top six qualities of providers that influenced the early-renewing buyers’ decisions to renew. As illustrated in Figure 3, flexibility is the quality most often cited by the buyers. 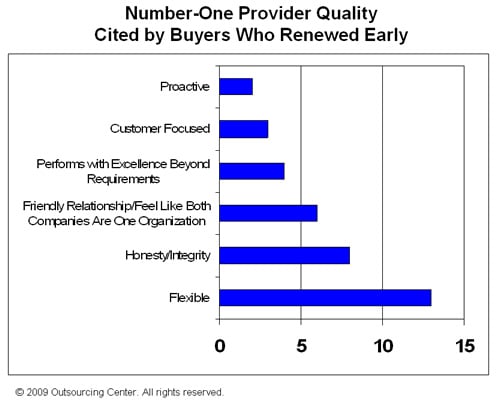 Our analysis of the buyers’ statements regarding qualities they like most about their providers includes a notable finding in the number-two and number-three factors in Figure 3. Where buyers cited “a friendly relationship and feeling like both companies are one organization” as a factor, they most frequently listed it as the number-two factor (after flexibility) and did not cite honesty/integrity as a top factor because they perceived it as a “given” in the factor of feeling like both companies are one organization.

We also note that most of the buyers that cited “customer focused” as a top quality of their service providers referred to the provider’s focus on excellent service to the buyer’s external customers not internal users of the outsourced service.

Early renewal is a win-win

In 2004, Outsourcing Center published a white paper reporting on findings from a study we conducted in 2003-2004 of 199 outsourcing relationships. At that time, only nine percent of the respondents stated they had renewed their contracts early as a way of creating new value opportunities to realign their interests or strengthen the relationship.

In contrast, our study of the 92 relationships from the 2008 and 2009 Outsourcing Awards program found that 20 percent of the buyers renewed their contracts early in order to realign interests and strengthen their relationship. Clearly, as buyers’ knowledge of outsourcing matured over the past four years, they gained an understanding of the worth of taking steps to ensure they continually build value in their outsourcing arrangements and strengthen those relationships.

With early renewal of an outsourcing contract, a buyer can reward the provider for excellent service, compensate the provider’s loss of revenue due to its continual efforts in process improvement, and create new win-win opportunities.

This is especially true if the renewal includes expanded scope of services.

In the March issue of Outsourcing Journal we’ll look at the findings of these same 92 relationships surrounding their decisions to add scope and extend contracts.

How the study was conducted: We used written information and telephone interviews of the 92 relationships in our analysis. The majority of the buyers in the relationships we studied are in the following industries: manufacturing/high-tech manufacturing, healthcare/pharmaceutical, oil & gas/energy/utilities, information and communication technology, financial institutions, and government entities. The study included one buyer in each of the following industries: media/entertainment, distribution, logistics, consumer packaged goods, airline/travel.