You are at:Home»Articles»The Rise of Global Business Process Outsourcing | Article 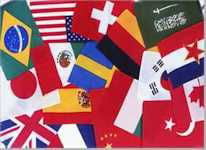 Global competition is the most important issue facing top decision makers in some of the world’s largest companies today. To meet this challenge, leading companies worldwide are focusing their resources on their core competencies as a business strategy to compete profitably in a global market. Business Process Outsourcing (BPO) is paving the way for leading companies to compete globally and increase profitability into the new millennium. The practice is gaining widespread acceptance throughout the United States, Europe, South America, and Asia Pacific as an important new management tool to improve performance and profitability, gain competitive advantage in the global marketplace, and ultimately build shareholder value.

This overview of the global acceptance of BPO is one of the results of the Global Top Decision-Makers StudySM on Business Process Outsourcing, sponsored by PricewaterhouseCoopers and conducted in 1997-98 by the noted market research firm, Yankelovich Partners. (Over the next several months, PricewaterhouseCoopers also will release analyses that compare BPO usage and satisfaction geographically, as well as by executive title, industry, and by experience with BPO).

In this ground-breaking study, the first ever to focus on BPO globally, Yankelovich interviewed 304 top executives — CEOs, Presidents, COOs, CFOs, CIOs and CSOs — at the world’s largest companies in 14 countries. The findings clearly indicate strong growth in Business Process Outsourcing worldwide.† Among the top decision makers interviewed, nearly one-third (32%) said that global competition is the single most important business issue facing their companies today. Indeed, they ranked global competition as an even more important issue than other management concerns such as profitability (13%) and growth (10%).

That emphasis on global competition appeared to drive the senior executives’ strong interest in Business Process Outsourcing as a new business model for managing their operations around the world.

The Yankelovich study revealed that most of the companies had tested the waters of BPO. Nearly two-thirds (63%) of top decision-makers interviewed reported that their companies had already outsourced one or more business processes to external service providers. The business processes ranged from finance/accounting functions to global sourcing/procurement to real estate management.

BPO usage and interest varies among different countries and regions. The practice is most prevalent in Canada (73%), United States (72%) and Australia (72%) where about three-quarters of the executives reported Business Process Outsourcing programs in place. More than half of the companies in Japan (60%) and Europe (55%) have BPO programs, but less than half (40%) of the companies in South America have BPO programs.

The rate of usage reflects BPO’s increasing importance. Nearly one-half (46%) of the executives interviewed said that the importance of BPO has increased at their companies during the past three years, while two out of five (42%) executives reported an increasing company-wide shift to BPO during this same period. Almost one in four (23%) executives report that BPO is now written into their business plans.

Why are so many companies moving to BPO as a management practice? Because business leaders increasingly recognize its strategic benefits. Among the executives interviewed:

The importance of shareholder value as a strategic benefit of BPO was noted by three out of five (62%) of the senior executives, who said that increasing shareholder value is an important factor in considering BPO initiatives.

Worldwide, the study finds leading companies are focusing their resources on core competencies as a business strategy to compete profitably in the global marketplace. Distinguishing between core and non-core competencies is a critical step in the process of deciding what processes might be outsourced. In all countries, senior executives regard back-office, cost-center functions as non-core to their basic business. These range from real estate management to tax compliance to human resources.

The business processes most frequently outsourced vary among different countries and regions:

Worldwide, senior executives most often responsible for the decision to outsource business processes hold titles in the corporate, operations, and financial areas, as follows:

Looking to the Future

The Yankelovich study concludes: “In the new millennium, Business Process Outsourcing will pave the way for businesses worldwide to focus their energies on their core capabilities. Expectations for BPO are high, and non-core functions are the best candidates for outsourcing. Top executives will seek out key strategic benefits that will increase performance, profitability, and global competitiveness leading to improvements in shareholder value.