You are at:Home»Articles»What Is the Cost of Owning an In-House HR System? | Article

Outsourcing suppliers claim outsourcing human resources (HR) and the IT that supports it is more cost-effective than keeping the process in-house. But is that really true? How much does outsourcing human resources information systems (HRIS) really save? What are companies really gaining by implementing state-of-the-art enterprise resource planning (ERP) systems that contain an HR module?

Greg Secord, vice president of marketing and business development for a division of ADP, Inc., an outsourcing supplier, says its customers – the chief financial officers (CFO) of the world – are “wary of service provider savings numbers.” So, ADP set out to provide its customers with some credible hard facts about the costs of owning an in-house HRIS/ERP. “We believe outsourcing provides a superior economical value proposition over doing it yourself. So we sponsored an independent study to instill some credibility into the numbers,” says Secord.

ADP commissioned Pricewaterhouse Coopers (PwC), the global accounting firm, to study the issue in October 2003. The results of the study, entitled “The Total Cost of Ownership: Warning Signs of Hidden In-House System Costs,” led PwC to declare the true total cost of ownership “may be much larger” than most executives realize.

Key highlights of the study uncovered some often overlooked costs associated with processing employee paychecks. The study revealed that executives do not adequately measure two key components within the payroll module of their HRIS:

This is important because these two components can “add significantly to the cost of ownership,” according to PwC.

The study opened some eyes about the true cost of ownership, particularly when it comes to payroll processing. For example, companies who thought their cost per paycheck was between $2 and $6 have an actual cost of $16 per paycheck when they add the two forgotten factors. That comes to a total of $459 per employee per year. Overall, the study found the average annual cost per employee for owning and maintaining an HRIS is $88.

Secord says many interviewees were surprised at the significant costs outside the payroll department. Those hidden costs account for 60 percent of the cost of ownership, according to the study.

Secord says one message came out loud and clear: “Buyers understand they are on an upgrade treadmill and want to get off.” Some of the respondents had already completed three upgrades since they purchased their ERP systems. “They were upset about the continuing significant investment,” he reports.

One reason they were upset was because only 25 percent believed they would realize any cost savings from their next upgrade. More than half – 53% – said they did not expect the system change to change the cost of their payroll administration and 7% expected the costs to increase. “Companies are paying the fees but not getting a return on investment (ROI) from their systems,” Secord notes.

In addition, these ERP systems are so comprehensive that many companies – “a surprising number” according to the study – only use a fraction of the system’s capabilities. A quarter (23%) use only four core modules – the core HR system, base benefits, compensation, and compliance and regulatory reporting – while ignoring others. On the other hand, 30 percent said their recruitment; employee and manager self-service; and competency and career development modules sat on the shelf.

“Shelfware impacts the bottom line,” states the PwC report. It calculated that shelfware costs companies an additional $30 per employee per year. 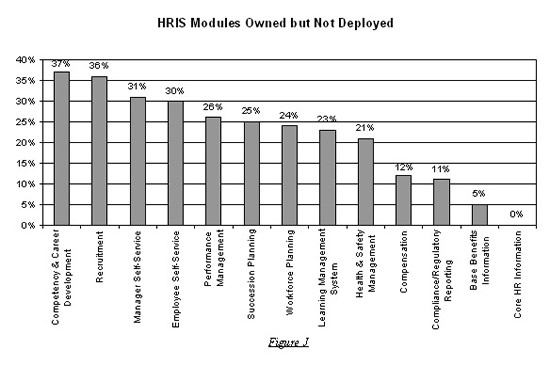 “Companies are either not adept at implementing new modules or the expected benefits are not what they anticipated at the time of purchase,” the report continues.

The study also found that companies rarely saved money when they replaced their legacy HRIS for a state-of-the art ERP system.

“The PwC findings are wonderful for outsourcing suppliers,” says the ADP executive. “CFOs can see they can outsource HR for the same dollars they must spend to upgrade their current software,” concludes Secord.

How the study was done: PwC enlisted the help of Financial Executives International (FEI), a professional association for senior level financial executives. FEI encouraged its members to go to a Web site and complete a survey that analyzed their HRIS costs. One-hundred-eighty-one companies with more than 1,000 employees who process payroll in-house answered questions about purchasing software, the cost of consulting services, and the number of people needed to accomplish the necessary tasks. Then PwC conducted 400 interviews to clarify the responses.

The average size of companies participating in the study was 6,500 employees.