The convergence of rising customer service demands and cost concerns creates an increasing dilemma for business — a dilemma even more critical for mid-sized firms. With more channels, more options, and, according to many reports, more failures in customer relationship management (CRM) deployments, which way should a business turn?

Ultimately, it comes down to good old-fashioned customer service provided by a real live person. Many companies consider offshore outsourcing for cost effective human customer interaction but worry about the accent as well as the time zone. But there is one offshore location that eliminates those concerns. The world economy and local demographics of Canada create an excellent solution for cost effective call centers and help desks.

The Bank of Canada estimates that over the past five years, the currency exchange rate between the U.S. and Canada favors Americans by 44 percent. Even under the less-than-rosy economic climate of 2002, the exchange rate remains very favorable. For every dollar an American business spends in Canada, it receives over a dollar and a half in goods and services. 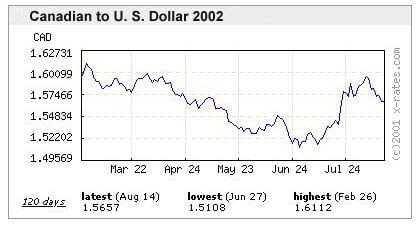 Additional factors make Canada even more attractive. In June 2002, the Canadian unemployment rate was at 7.5 percent while the U.S. unemployment was 5.9 percent. Almost two-thirds — 63.2 percent of Canadians over the age of 15 — are high school graduates. With a predominantly rural population with a strong work ethic and a declining industrial base, Canada is fertile ground for call center outsourcing solutions.

Unlike relative newcomers to the call center world, Canada has been a leader in the field for a decade. Since the early 1990’s, “the Canadian call center industry has grown at an annual rate of 20 percent,” according to Steve Demmings, president of Site Selection Canada of Winnipeg, Manitoba. Site Selection Canada promotes and assists in site selection for American and Canadian firms.

Demmings estimates there are 14,000 call centers in Canada with six or more agents employing 500,000 people, contributing about $36 billion (Canadian) in annual salaries. In 1994, two Canadian provinces – Manitoba and New Brunswick – made a concerted effort to develop a local call center industry, recognizing the area’s high unemployment with little native industry, Demmings continues. The other provinces soon followed. Then, the call center industry “made a big move” to bring educational institutes on board. “Many colleges have set up call center training programs,” Demmings reports.

According to Frank Koelsch, President and CEO, Everest Group Canada, “There has been a substantial initiative in Canada, specifically in the east coast region to promote call center development through federal and provencial government funding to mitigate the decline of traditional industries such as the fisheries.”

The result has been an established industry with an excellent skilled labor pool. “American companies come up here to go shopping and we need to have the tableware on the table,” says Demmings.

Recognizing that Canada has an established reputation for high-end call center personnel, there has been a shift away from outbound call centers, he notes. “Now, many of the provinces are only promoting inbound call center outsourcing. Outbound calling and telemarketing has virtually dried up.”

Customer Service as a Profession, Not a Job

What’s important to outsourcing buyers is that many Canadian call center customer service representatives have made it their career. Subsequently, there is a much lower turnover rate for call centers than in the U.S. For example, Demmings reports the CSR (customer service representative) turnover rate in the Province of Ontario was 18.3 percent last year.

Compare that to the U.S., where call center staffing can be a problem. Christopher Fletcher is vice president and research director CRM for the Aberdeen Group, an IT market analysis and positioning services firm based in Boston, Massachusetts. “It is tough to find people to staff a call center. Turnover ranges from 25 percent to 50 percent annually or above. The skillsets of the people you have available are often equivalent to McDonalds,” Fletcher says.

In American dollars, real wage costs drop down to almost those of McDonalds, thanks to the differential in the currency rate, creating a bonanza for American outsourcing buyers. Demmings points out the wages for a good motivated call center employee start at $10 an hour (Canadian). “If a company pays $12 to $14 per hour Canadian, they are getting a huge bang for the buck,” he says. By outsourcing call centers to Canada, American firms can get a Cadillac for the price of a Chevy.

Fletcher notes that offshore outsourcing service providers in India or Russia offer online training to teach their CSRs about American popular culture, familiarizing them with baseball, soap operas, and popular TV shows. Canadians, however, know about “Survivor,” so that kind of training is not needed.