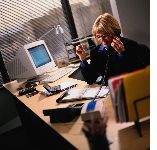 The Every Woman’s Company needed 30 top salespeople nationwide for the roll out of its financial seminars for women. The company signed Erin Brockovich (the real person, not Julia Roberts) as its spokesperson. But the company found out quickly putting together a sales force was as easy as, well, battling a big California polluter.

The company needed a sales force now. So, who ya gonna call? The ladies called First Technology Sales.

This BSP’s goal is to help emerging companies rapidly deploy top gun sales professionals. (The firm’s domain name is “topgunsales.com.”) It combines its business process expertise in the selling forum with proprietary software called the Cheetah Sales System — it shares with its clients on the Web using the ASP model.

First Technology’s clients outsource their entire sales function to the supplier. The BSP develops a sales plan, hires the sales team, and then trains them. It also hosts and maintains the sales software. While leopards can’t change their spots, this Cheetah is customized for every client. Content, training and competitive industry information constantly change during the contract period.

Michael Barrett, CEO, says The Every Woman’s Company’s experience is typical. The No. 1 reason why companies outsource their sales function is their need for speed to market. First Technology can have its software ready in two weeks and its top guns recruited and trained in six. The firm can be so speedy because the software is not a customer relationship management program.

Personnel is another factor driving companies to outsource the sales function. Unemployment is low and good salespeople are highly prized. Companies are having a hard time finding one top gun. Forget finding 30.

The Oregon BSP, on the other hand, has a talent pool of 2,600 prescreened candidates. Once a candidate joins First Technology’s staff, that sales person becomes dedicated to one client for the duration of the outsourcing contract. With every contract, First Technology assembles a sales team that includes a senior recruiter, a technical person and a consultant.

Companies also decide to outsource sales when they are launching a new project or opening a new territory. “They need top gun sales expertise to get some traction in the market,” says Barrett. Then they bring in their own people after they have experienced some success.

First Technology specializes in small, emerging companies enjoying their second or third round of funding. The owners are typically technologically focused and have no flair for sales. “Technology people and sales people don’t go to the same parties,” says Barrett with a laugh. The techies appreciate the BSP’s turnkey sales program. “We’re trying to change or upgrade the DNA of the company,” he explains.

The melding of the ASP and BPO models has been rewarding for First Technologies. Barrett says the BPO model enjoys high margins. However, because it sells services, “you wake up unemployed every morning.”

The ASP model, on the other hand, has both recurring revenue and economies of scale. BPOs that have useful technology and competent hosting and information management can add monthly revenues, “something BPOs generally struggle with,” notes Bennett. He calls the ASP portion of his business “the creation of a knowledge domain.”

Customers like the BSP proposition because they just want a business solution. They trust their BPOs, so it doesn’t take much of a leap of faith to let their BPOs become their ASPs, too.

Having Skin in the Game

First Technology divides its fees into two buckets. It has a monthly fee that is well below the market for a comparable BSP. The second piece is a success bonus that equals a percentage of the gross revenues which allows the outsourcing provider to be paid based on its sales success. “The success bonus allows us some wealth creation,” says the CEO.

Its customers feel comfortable with the arrangement because they know First Technology “has skin in the game” and is willing to share the risk.

To create a successful outsourcing relationship, Barrett suggests that each buyer identify an internal champion who becomes the point person. Typically, that person is the chief sales officer. This champion must be “100 percent in sync with the strategy we put together” and is responsible for teaching these precepts to the rest of the organization. The worst thing that can happen is for the client company “to treat us like an outside consultant,” says the CEO.

Putting Together a Sales Force For a Year

Lessons from the Outsourcing Primer: