Research by ContactBabel, Forrester Research, and Datamonitor finds continued growth in contact center outsourcing in the United States and Europe. A key trend is the growing preference by buyers of domestic or nearshore locations for greater ease in managing the engagement and reducing the risk of alienating important customers due to accent and cultural issues. More companies are increasingly reluctant to consider offshore locations.

Elizabeth Herrell, vice president and principal analyst, Forrester Research, sees a shift back towards the United States. “There is a move on a small level to bring agents back to the United States, often for higher-value customers.”

The call center outsourcing will grow this year. “Outsourcing will be popular with a pay-as-you-go model in an uncertain economy,” adds Herrell. ContactBabel of Sedgefield, County Durham, UK found the growth of outsourced centers was higher than the overall growth of contact centers in 2008.

The specialized needs of the buyer are increasingly determining the use of outsourcing. Significant differences in drivers to outsource exist based upon the size of the call center for the business.

Peter Ryan, lead analyst — contact center outsourcing and BPO for Datamonitor, sees nearshore on the rise. “There are definite trends toward more nearshoring. This is due to a number of issues, including the need to be physically closer to the contact center facility, cultural familiarity, and time zone issues.” Language capabilities, price points, and stability were the areas contact center managers cited “most frequently. The interesting thing was that between 2007 and 2008, price increased in importance.”

Ryan says that Colombia, Mexico, Argentina, and Chile are among the most often cited countries on the rise. These locations are “certainly being targeted for the U.S. Hispanic market. Colombia, Chile, and Argentina are locations with significant Spanish offshore components serving Spain.”

Herrell sees growth in serving the Spanish-speaking U.S. market. “People are looking more into Mexico and Latin American countries. None of these are huge operations, but there are many centers being set up.” She sees the Philippines as a low-cost hot spot.

For Europeans, Ryan sees Egypt, Kenya, and Malaysia as among the newest countries most cited. The value proposition is largely cost driven with similar time zones adding to the interest in Egypt and Kenya. “These countries are significantly cheaper than onshore delivery. There are excellent pools of multilingual labor in Egypt, and a large number of English speakers in Kenya and Malaysia.”

For Germany, Harrell sees a “movement towards Central Europe, specifically Romania, the Czech Republic, and Poland in particular. You are seeing some outsourcing in smaller countries with people who speak French. South Africa is very popular in Europe for the English language.”

Offshore not as popular a choice

The difficulty in managing an engagement at call centers half a world away combined with changes in currency valuations and customer discontent reduce the appeal of offshore customer care.

Datamonitor noted that respondents had limited plans to move any of their contact center delivery to a foreign location. “Accent has been a sticking point for some locations,” observes Ryan. “For the most part it has been eliminated as offshore suppliers have tried to train agents accordingly. However, the bad taste has lingered in the mouths of many. There has been some concern in the general public and among enterprises about quality and security of offshore operations.”

“Consumer products are where customers complain about the language difficulty. You are getting a backlash,” submits Herrell. “If you are having a clash where the agents have no understanding of the U.S. culture and no background and training, then it is more difficult to retain customer loyalty.”

The ContactBabel U.S. report indicates that less than 20 percent of the respondents welcome offshore as an option. “Offshoring is much more an issue of cost than is outsourcing in general,” explains Morrell. “It is more likely to appeal to organizations spending tens of millions of dollars each year on their customer contact operations.”

“You need to look at the culture of the country and what the best fit is,” advises Herrell. “It is not just the cost of the agent. Will the culture of that country be compatible with your customer base? If you blend those two successfully, then location is more neutral. It can be successful when all of the right factors are considered.”

The September 2008 ContactBabel report, “The UK Contact Centre Operational Overview,” surveyed 208 respondents with results showing an increase of 9,990 outsourced seats in the UK, a compound annual growth rate (CAGR) of 12.7 percent. Outsourcing call center providers in the UK will add over 26,000 agent positions in the next four years, according to the report.

The August 2008 report by Forrester of Cambridge, Massachusetts, “2008 Contact Center Technology Trends,” surveyed 148 respondents. The findings revealed that 29 percent of European and 19 percent of North American organizations planned to increase the use of outsourced customer contact services. Figure 1 below details the findings. 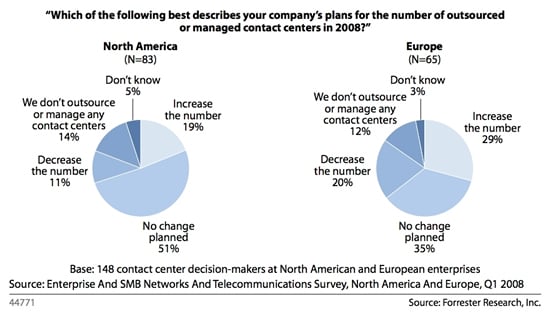 In Datamonitor’s August 2008 report, “Business Trends: Contact Center Outsourcing and Services – Understanding Your Contact Center Outsourcing Customer (Customer Focus),” the London analyst firm queried 150 North American, European, and Australia/New Zealand senior executives. The results indicated that the majority of respondents outsource some seats but rarely more than a quarter of the positions. Respondents indicated that outsourced agents handled a third of sales related and 20 to 40 percent of the service-related functions.

ContactBabel reports that 40 percent of U.S. respondents used contact center outsourcing in some way in 2008. The functions of outsourced U.S. agents are illustrated in Figure 2 below.

“A lot of companies outsource on a limited basis,” observes Harrell. “Outsourcers do fulfillment, extra hours, and language coverage. 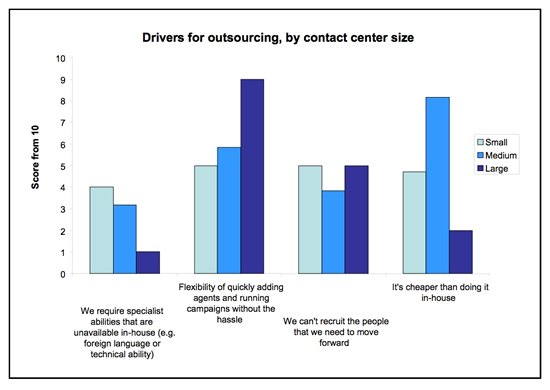 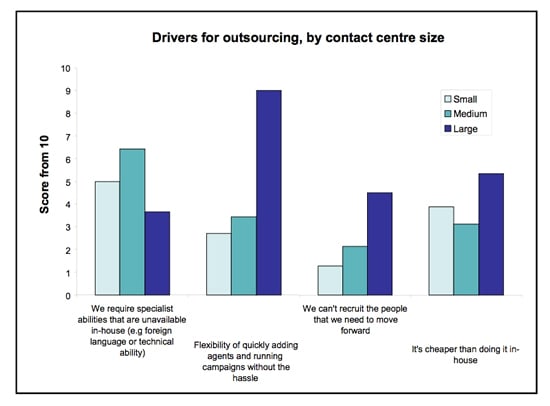 The value of outsourcing in scaling up or down marketing campaigns for large centers in both nations is striking, according to Morrell. “The ability to ramp up agent numbers quickly without the time and expense of having to recruit lots of short-term agents is very useful,” he says.

“The ability to scale or cut back as needed is attractive to a lot of companies,” says Herrell.