Even highly successful outsourcing relationships encounter hurdles. Despite their best efforts in planning, due diligence, contract negotiation, and other pre-signing activities, buyers of outsourced services can experience situations that fall short of their hopes and fail to fulfill their expectations. While these disappointments may not cause an already-successful relationship to fail, they can lead to frustration, reduced confidence, and sometimes to costly renegotiations.

The 36 buyers’ descriptions of their biggest relationship disappointments focus on three primary areas: mistaken contractual assumptions, the service provider’s over-promotion of its capabilities or technology, and communications post contact signing. They also cited six other areas of disappointment that, together, comprise the “miscellaneous” slice in the chart in Figure 1. 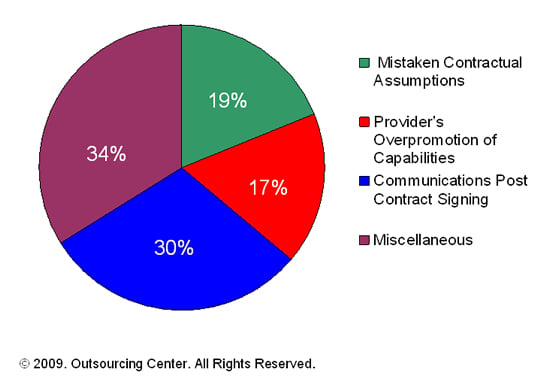 Interestingly, four of the six miscellaneous areas are factors around which only the buyers could influence a change. The six areas include:

Disappointments because of mistaken contractual assumptions

As Figure 1 displays, mistaken contractual assumptions caused 19 percent of the buyers’ disappointments. Primarily, the buyers describe the challenges or friction their relationships encountered in this area as follows:

A significant finding of the study is that 80 percent of the buyers that encountered relationship disappointments due to mistaken contractual assumptions did not use any external advisory services as they planned and negotiated their deals. (See Figure 2)

Figure 2: Advisory services relied on by buyers that had mistaken contractual assumptions 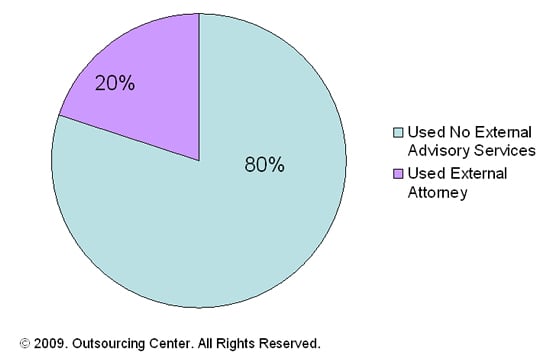 The recurring theme in these cases is that the buyers had prior experience with outsourcing and believed they had enough knowledge to structure their deals without external advisory services, thus accelerating the time involved in pre-signing activities and the associated cost of such services.

However, as one buyer stated, “We thought we knew more than we did. The reality is that understanding what’s going on in the market and in the industry is important and something a consultant can actually help with.”

Several buyers discussed the strategies they put in place in their relationships to handle challenges that arose from mistaken contractual assumptions. In most cases, the buyer and supplier agree that, when something arises in the contract that is ambiguous, or that was a mistaken assumption, they will sit down and talk about their original intent, come to an agreement on the language to memorialize it, and move on.

One buyer explained the importance of understanding that such discussions mean that sometimes the buyer will win and sometimes it will lose. This executive says he believes companies should address the contract’s shortcomings in renewal negotiations. Continually addressing overages and underages in pricing each month, for instance, is not productive, the buyer’s exec points out.

Several buyers stated that both parties being open with each other and willing to learn lessons together as they go along is key to building a strong relationship and avoiding friction. “Everyone needs to learn from mistakes” to make sure they don’t happen again, says one buyer.

The remedy for such situations: retain the services of an outsourcing advisory firm when renegotiating the relationship at contract renewal. One of the buyers in the study did this and reports that its second-generation contract not only eliminated troublesome terms in the contract but also created a better balance between building the relationship and governing it.

Outsourcing advisory firms possess the market and industry insights that buyers — and their external and internal attorneys — lack, and which can be critical to developing greater value through outsourcing. Market data is essential, for instance, in determining fair pricing, establishing solid process scope, evaluating the provider’s true capabilities and technology, and closing expectations gaps — areas that several of the 36 buyers cited as their biggest disappointments (as displayed in the “miscellaneous” portion of Figure 1). Such data can help the parties in an outsourcing relationship avoid making decisions from incorrect assumptions and avoid escalated problems that can result from those decisions.

Today, there are solutions in advisory services that streamline the time and cost associated with the services. Some advisory firms, such as Everest Group, recently enhanced their services to provide a “menu” of proven tools, templates, frameworks, and market data that companies can purchase and leverage as they negotiate their renewals or their first-generation deals for greater success and deeper value.

As Figure 1 displays, communications post contract signing were the area of biggest disappointment for 30 percent of the 36 buyers in the study. Aside from contractual disputes, they cited such communication challenges as the following:

The remedy for addressing each of the types of communication problems cited by the buyers as their biggest disappointments in their relationships is a more effective governance agreement that clearly outlines expectations, frequency, proactiveness, and other agreements as to how the parties will communicate with each other.

Finally, the study revealed that the parties could have addressed and, in most cases, would have prevented 100 percent of the big disappointments that the 36 buyers experienced in their otherwise successful relationships up front. The starting point for eliminating these challenges in any outsourcing relationship is during the planning, due diligence, negotiation, and other pre-contract signing phase.